India’s playing XI can be like this in the second ODI, will Deepak Chahar return! 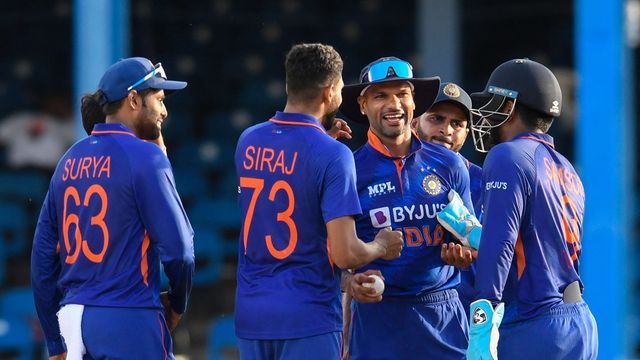 The Indian cricket team is playing the three-match ODI series against New Zealand under the captaincy of Shikhar Dhawan. After the 7-wicket defeat in the first match, the Indian team will now look to win the second match and return to the series.

In the first match, Indian batsmen batted well scored and scored 309 runs on board, but Indian bowlers were not able to save this score. In such a situation, the bowlers of Team India need to perform well in the second match with utmost care.

It is necessary for the Indian team to come back in the second match because if there is a defeat in this match then the series will have to be lost. In this situation, whether captain Shikhar Dhawan now trusts the playing XI of the first match or there will be some change in the team, it will be interesting to see.

Although there is little chance that there will be any change in the playing XI, but all eyes will be on Deepak Chahar who did not play in the first match. The Indian team management will decide at the last moment about Deepak’s inclusion in the playing XI and in this situation Shardul Thakur may have to be dropped from the playing eleven.

If we talk about the opening for the Indian team, once again Shubman Gill will start the innings with Dhawan and both these batsmen had played a good innings in the first match as well as had a good partnership for the first wicket.

At number three will be Shreyas Iyer who scored 80 runs in the last match. Rishabh Pant was sent to bat at number four in the first ODI, but he could not score runs. In such a situation, Suryakumar Yadav can come to bat on this order.

Rishabh Pant will continue to be a part of the team as he is also the vice-captain of the team, but he might bat at number five. The team’s all-rounder Hardik Pandya can be at number six while spin all-rounder Washington Sundar at number seven, who batted fast in the last match.

There could be a battle between fast bowling all-rounders Shardul Thakur and Deepak Chahar at number eight. That means either of these two can get a chance. In fast bowling, Umran Malik and Arshdeep Singh can be part of the playing XI, while on the spinner side, either Yuzvendra Chahal or Kuldeep Yadav can get a chance.