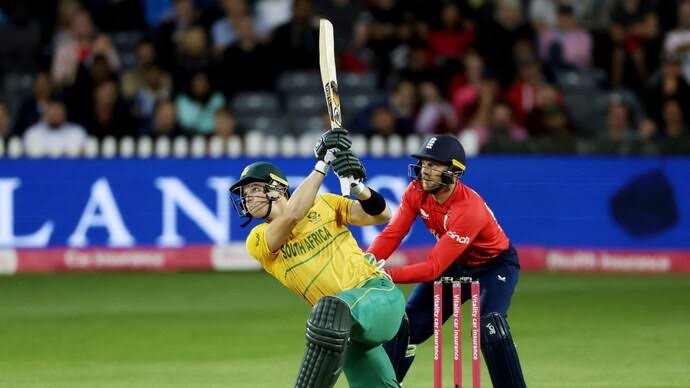 Many legendary players are participating in the T20I league being played in South Africa. Many young players are also showing their talent in this league.

One such player is Tristan Stubbs of South Africa. This player is playing for Sunrisers Eastern Cape in this league. On Monday, this team faced Durban Super Giants and in this match, Stubbs hit such a six that the ball was seemed lost in the camera. In this match, Stubbs created a storm in the last over and helped his team reach a huge score.

The team of Sunrisers made a huge score while batting first in this match. This team scored 210 runs in the stipulated 20 overs losing just two wickets. South Africa’s T20I league has all the same franchises as the Indian Premier League.

The 19th over of the Sunrisers innings was going on. The bowler was Vian Mulder. Mulder bowled the ball outside the off-stump and Stubbs shuffled it lightly and took it in the middle of the bat and played it towards long on.

This shot was very high and after the ball went very high, it stopped appearing for a while. No one knew where the ball got lost in the sky. Even the camera could not catch this ball. Stubbs faced 13 balls in this match and scored an unbeaten 27 with the help of two sixes apart from one four.

Watch- Tristan Stubbs six in which ball disappeared in sky

Apart from him, the captain of this team, Aiden Markram, played an unbeaten inning of 44 runs in 34 balls with the help of three fours and a six. Before these two, the opening pair of the team thrashed the bowlers of the Super Giants fiercely.