Ruturaj Gaikwad told, what was going on in his mind about hitting 7 sixes 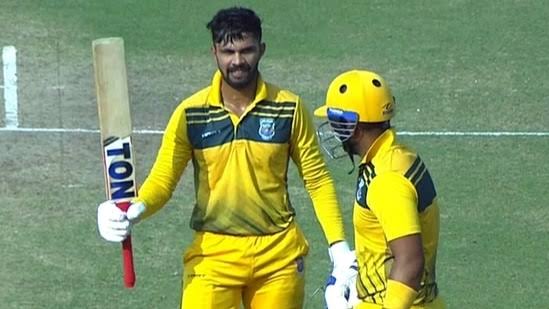 Hardly anyone can imagine what happens on the cricket field, whether it is a batsman or a bowler. Whatever happened at the Narendra Modi Stadium in Ahmedabad in the second quarter-final match of Vijay Hazare Trophy 2022 became history and this history was created by Maharashtra opener Ruturaj Gaikwad while playing an unbeaten 220 against Uttar Pradesh.

Ruturaj made a unique record of hitting 7 sixes in an over and after his important innings, he had a special conversation with a journalist.

Here’s is the special conversation with Ruturaj Gaikwad with Press –

How do you feel after the kind of innings you played Ruturaj? —

I feel very good after playing this innings. First of all, we won this match and reached the semi-finals and personally I have scored my first double century in List A, so it is a great pleasure.

When the 49th over started, you were playing on 165, then what was going through your mind, because that over was over and you went straight to 207. After all, what was going on in your mind ball to ball and when did you think you would be able to hit six sixes? —

That was the cherry on the cake and when six sixes were hit, I had to go for the seventh six and then I was successful.

It was your dream inning and you ever thought that you would hit a double century, but did you think of hitting six or seven sixes in an over? —

No, no, I never thought of hitting six or seven sixes in an over. Yes, I thought that I would hit a double century.

Yes, you have to think a little beforehand. You should know where the bowler is bowling, what is his plan. There are very few players who hit sixes on the off side and all the big hitters hit sixes on the on side or straight. So I didn’t think that I have to hit on one side, but hit the ball where I got it.

Will you sleep well at night now? —

Yes, I am tired so of course I will sleep well.

To whom would you dedicate this innings? —

I would like to dedicate this innings (the list is very long) to the entire team who worked very hard. We have reached here with a lot of hard work, so being a senior player, I will dedicate this to my team and also to the Maharashtra Association.

Your career flourished under MS Dhoni and now you are leading the team, how important will it be for you to go into the next match or start from scratch? —

There will be no change in my mindset and I will try to continue the way I have been playing.