Bangladeshi players furious over DRS system failure in live match, Shakib was about to kick the stumps! 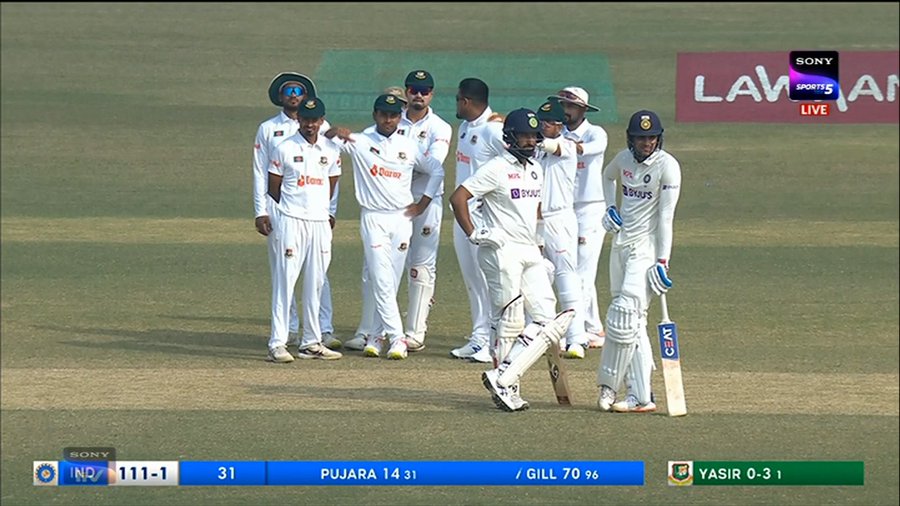 The second match of the two-match Test series between India and Bangladesh is being played in Chittagong. On the third day of the match, when the Indian team came out to bat in the second innings, a strange incident was witnessed.

Due to some reason the Decision Review System (DRS) stopped working during the live match. Because of this, the decision on Shubman Gill’s out or not out could not be made. After this, Shubman thrashed the Bangladeshi bowlers a lot and scored the first century of his Test career.

Actually, this incident happened in the 32nd over of India’s second innings. Yasir Ali was bowling in this over, the first ball of his over hit the pad of Shubman Gill. Bangladeshi players appealed on this. However, the onfield umpire declared it not out.

AUS vs SA Test: Australia team announced against South Africa, this player made as captain

The third umpire, after waiting for some time, spoke to the onfield umpire and told that he would not be able to review it as the DRS was not working. Bangladeshi players got angry on this. Captain Shakib was about to kick the stumps in anger, but then he stopped.

Shakib has already been banned for kicking the stumps and misbehavior in the Bangladesh Premier League. In such a situation, doing so in this match could have created difficulties for him. Shubman was batting on 70 when the incident happened.

After this, Bangladesh players stood around the umpire for some time in frustration. However, play resumed later. After some time, when the replays were shown after the review was correct, it was shown that the ball was pitching outside the line and the impact was also outside. In such a situation, Bangladesh could have lost its review.

In such a situation, his review was saved due to non-use of DRS. Shubman scored an excellent century in the second innings. He was dismissed after scoring 110 runs off 152 balls. In his innings, Shubman hit 10 fours and three sixes.

Apart from this, captain KL Rahul played an inning of 23 runs. Cheteshwar Pujara played an unbeaten inning of 102 runs in 130 balls. At the same time, Virat Kohli scored 19 not out. India had scored 404 runs in the first innings.

In response, Bangladesh’s first innings was reduced to 150 runs. In the second innings, India declared the innings after scoring 258 runs for two wickets. In this way Bangladesh got the target of 513 runs. By the end of the third day’s play, Bangladesh have scored 42 runs without losing any wicket. Najmul is batting after scoring 25 runs and Zakir 17 runs.