Shakib was unhappy with the “No Ball” demand, the video went viral when he met Virat after dispute 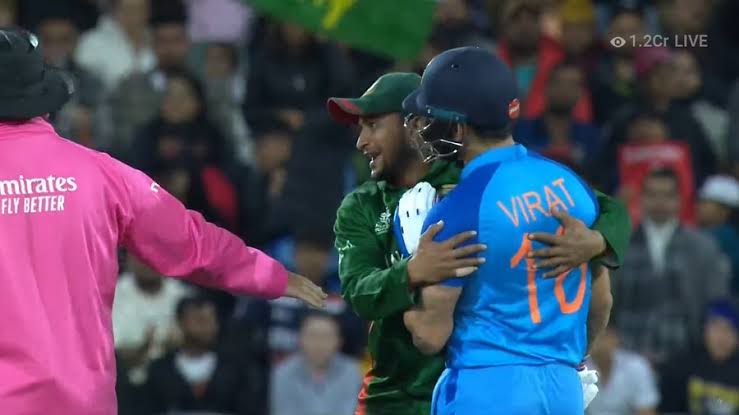 Virat’s stellar form continues in the T20I World Cup 2022. In the match against Bangladesh too, he played an unbeaten innings of 64 runs to get the team out of trouble when the team had lost the wicket of Rohit early after losing the toss.

But during the batting, Kohli did something in the 16th over whose video is now going viral on social media.

Hasan Mahmood was bowling on the last ball of the 16th over and Virat Kohli was on strike. He played a pull shot on the short ball as well as pointed at the height of the ball towards the umpire standing at square leg.

On this gesture of Kohli, Bangladesh captain Shakib Al Hasan came to him and talked to him about something. Both smiled and after that Shakib went back to his place.

There was also a dispute against Pakistan -:

In the match against Pakistan also there was a controversy regarding the no ball. In the last over, Virat Kohli hit a six off Nawaz’s ball, on which the umpire called it a no ball due to height.

Former Pakistan cricketers had raised questions about the decision of giving no ball to this ball. Former Pakistan fast bowler Waqar had also said that the umpire had given a no ball after Kohli signaled.

Talking about the match, India defeated Bangladesh by 5 runs under the Duckworth-Lewis rule. Batting first, India scored 184 runs for the loss of 6 wickets on the basis of half-centuries from Virat Kohli and Rahul.

In reply, Bangladesh team made a quick start but when the team’s score was 64 runs in 7 overs, the match was disrupted due to rain and Bangladesh got the target of 151 runs in 16 overs under the Duckworth-Lewis rule.

But Bangladesh team could score only 145 runs losing 6 wickets and India won the match by 5 runs. With this win, Team India has reached number one in Group 2 with 6 points.