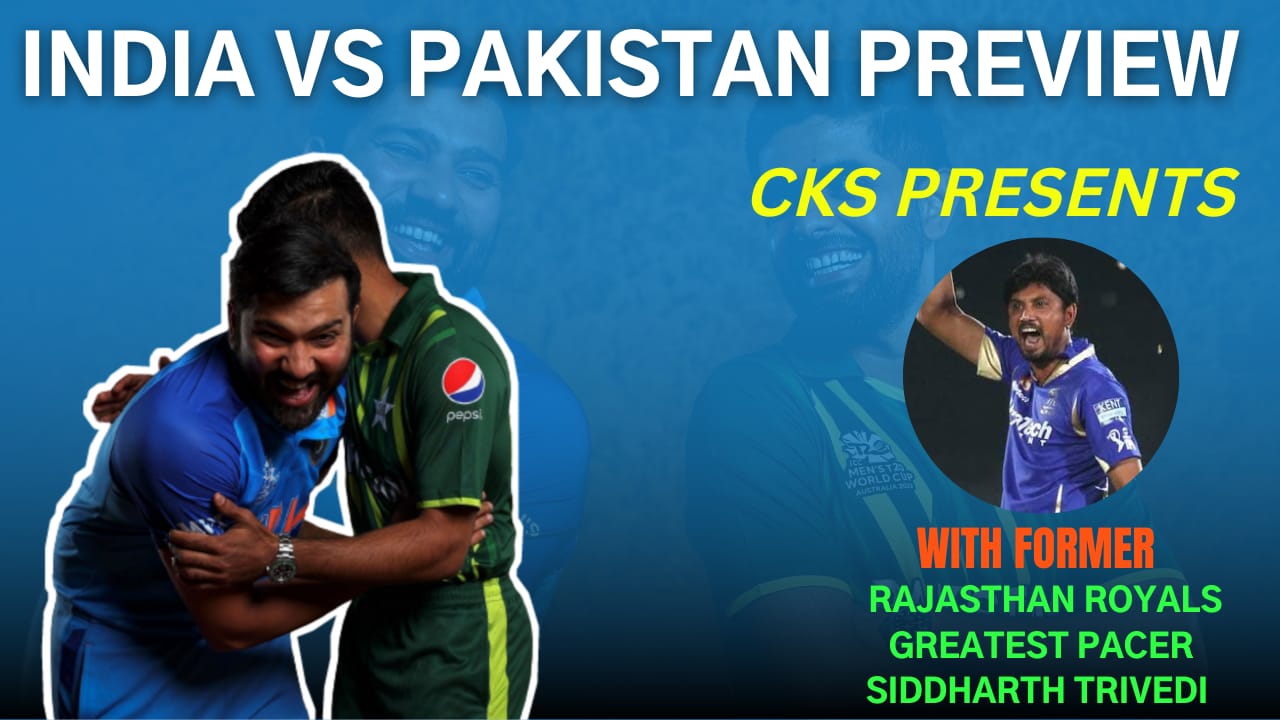 India-Pakistan game in the T20 World Cup 2022 is the talk of the town. Everyone is eagerly waiting for the game. Just before the gane ,our founder, Devansh Awasthi had an amazing session with the Rajasthan Royals great, Siddharth Trivedi. We’ve complied some questions from that amazing session.

Question:- If conditions remain overcast in Melbourne, what combination should India pick against Pakistan?

Siddharth Trivedi : India will not do any changes to their playing combination. Team India will go with three seamers and two spinners. Team is prepared for the big game and is unlikely to any changes until situation demands.

Siddharth Trivedi: Both Rishabh Pant and Dinesh Karthik has proven themselves in different series before the world cup. But Dinesh Kartik is best fit for the India with current combination.  The position suits DK and his explosive batting can get India some crucial runs in the death overs.

Siddharth Trivedi: Bhuvneshwar Kumar is will be the key bowler for India . He has performed well against Pakistan earlier. He can swing the ball both the ways which can trouble both Babar and Rizwan. Arshdeep, along with Bhuvneshwar can be handy for India with the new ball.

Question:- Role of Shami in this World Cup?

Siddharth Trivedi: Mohammed Shami is currently the best bowler in the Indian bowling line up. He is going through his best bowling form. He is experienced and can create pressure on other teams. His style of bowling is perfect for the Australian conditions.

Questions:- India or Pakistan, which is more strong?

Siddharth Trivedi: T20 is a format in which it can be anybody’s day. But India is much better team if compared to Pakistan. India will carry the winning momentum into the tournament . India has outplayed other teams in the bilateral series and has performed exceptionally well in Australia in the recent past.

Siddharth Trivedi:  The boundaries in Australian grounds are big, so spinners can use their variations.  It’s very difficult to clear the side boundaries. Spinners will feel comfortable bowling on these tracks. Our spinners have performed well on these tracks. They will have an important role to break momentum and pick wickets in the middle overs.

Question:- Which two spinners should be included in the playing XI against Pakistan?

Siddharth Trivedi: Axar Patel is the primary choice because he provides that extra batting cushion in the team and is a good fielder. Yuzvendra Chahal will be the secomd spinner against Pakistan. Chahal has been in a top form and can change the game single handedly.

Siddharth Trivedi: If India wins against Pakistan, the team will remain same against South Africa.  The team management has been showing belief in their players.

Question:- Difference in captaincy of Virat Kohli and Rohit Sharma.

Siddharth Trivedi: Both are great captains. Virat kohli had the aggressive style of captaincy, whereas Rohit Sharma is calm and composed. He is showing belief in his players. He has been seen taking advice with the senior members like Virat  Kohli, Rahul and Dhawan.

Question:- Which four teams will qualify for the semi finals?

Question:- What is the problem with the Pakistan team?

Siddharth Trivedi: Pakistan team is fully dependent on their openers ,Babar Azam and Mohammad Rizwan . The middle order lack experience and is out of form. Apart from the medium pacers, the spinners have not done well in the recent past.

Question:- What advice would you give to our openers against Shaheen Shah Afridi?

Siddharth Trivedi: Shaheen Shah Afridi is coming from injury. He will be worried about his injury and feel pressure of the big stage. Openers need to focus on basic preparation. They should not try different things just before the game.

Question:- X-factors for team India in this World Cup

Siddharth Trivedi: Rohit Sharma, Hardik Pandya and Virat Kohli will be the X-factors for team India in this World Cup.  Rohit Sharma has a long due and will try to make every inning count. Hardik Pandya is the premier all-rounders for India.  He has been doing expectional well since the IPL 2022. Virat Kohli carries that reputation and experience which always creates pressure on other teams.

Question:-Which team will shock everyone in this World Cup?

Siddharth Trivedi: Sri Lanka is probably the team because they have the fighting spirit despite not having big names in the squad. Sri Lanka amazed everyone in the recently concluded Asia Cup and the way they playing these days.

Sanju Samson was ready for the T20I WC, but did not gave the chance, the biggest mistake – Md Kaif

Which country got how much prize money in T20I WC 2022, Pakistan got more than India