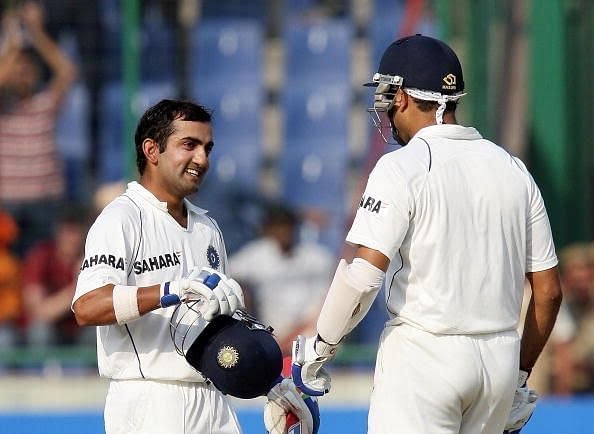 The most challenging thing for a cricketer is to change their game according to the format. The type of play that is required in ODIs is very different from what is Tests. Players need to have a lot of character and temperament while playing Test cricket .

The oldest format, Test cricket requires batters to counter the bowlers with defensive technique and only go for strokes when bad deliveries come at them. It requires not just skill but the right mindset to score big hundreds in the longer format.

In this article, we’ll look at 5 instances when 2 double centuries scored in a single test innings 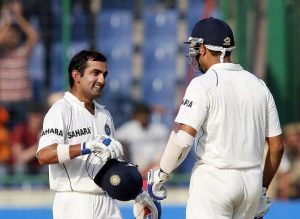 Gautam Gambhir and VVS Laxman are two of the greatest Test batsmen India ever had. Gautam Gambhir provided solid starts at the top of the order and set the platform. VVS Laxman was known for his match-saving ability while batting with the tail-enders, and led India to famous victories.

The Australia’s toured India for a 4-Test series in 2008. After the first Test ended in a draw, India defeated the visitors by a huge margin in the second Test and took a lead of 1-0 in the series. The focus shifted to the third Test at Feroz Shah Kotla.

Batting first, India lost two quick wickets of Sehwag and Dravid, but Sachin managed to provide the team some respite, scoring 68 runs. After Sachin’s wicket, Laxman came to and the Gambhir-Laxman duo put on a 278-run partnership for the 4th wicket before Gambhir got dismissed for 206. Laxman carried on and scored an unbeaten 200, his second double-century and India declared at 613-7. 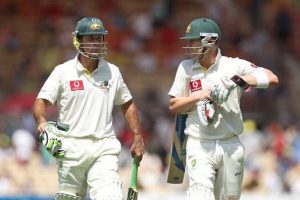 Ricky Ponting and Michael Clarke ,the former captains need no introduction. They were both successful captains and the Australian team played fearlessly  under their captaincy.

India went to Australia for a 4-Test series in 2012. Australia clinched the series 3-0 after the first three Tests. The final Test in Adelaide was just dead rubber. Ponting and Clarke, who had been brilliant throughout the series, continued their dominance.

After losing 3 early wickets for just 84 runs, Clarke and Ponting added 386 runs for the fourth wicket before Clarke was dismissed by Umesh Yadav. Clarke scored 210 off just 275 balls and Ponting scored 221 off 404 balls. They combined for 47 boundaries and a solitary six. 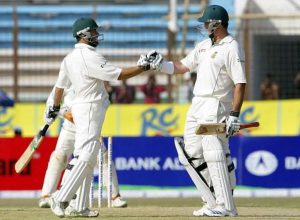 Graeme Smith is undoubtedly the greatest Test captain of all-time. He holds the record for most Tests as captain and South Africa had great success during his tenure as captain.  Neil McKenzie played 58 Tests and scored 3253 runs at an average of 37.39.

South Africa were playing against Bangladesh for a 2-Test series in 2008. After winning the first Test in a fine manner, the visitors were looking to win the second and the final Test and go home with the cup. South Africa won the toss and chose to bat first.

Neil McKenzie and Graeme Smith combined for a record-breaking partnership of 415 runs for the first wicket. They dismantled the bowling line up  and hit the bowlers all around the park and played at a really good pace. Neil McKenzie got out for 226 runs off 388 balls. He hit 28 fours and 3 sixes. This was his first  double century in Test cricket. Greame Smith scored 232 off 277 balls with 33 fours and a six. They went past the previous record of 413 runs set by Vinoo Mankad and Pankaj Roy. 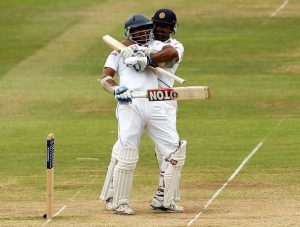 Mahela Jayawardene and Kumar Sangakkara were the key of the Sri Lankan batting lineup for over a decade and came up alive every game to help the team win games. The two left their mark on the game of cricket and will forever be remembered as legends. After their retirements, the team has been struggling to find replacements.

Sri Lanka was playing against South Africa for a 2-Test series in 2006. In the first Test at Colombo, the Proteas batted first, but were bundled out for just 169. Dilhara Fernando and Muttiah Muralitharan went through the batting line up  with combined figures of 31.2-8-89-8.

In return, Steyn struck early, picking up two wickets, and the hosts were reduced to 14-2. Then Jayawardene and Sangakkara piled on a record partnership. They stitched 624 runs for the third wicket . The partnership was  broken when Sangakkara fell to Hall after scoring 287 runs off 457 balls with 35 fours. Jayawardene finished the innings with 374 off 572 balls, accompanied by 43 fours and a six.

The hosts went on to win the game and go up 1-0 in the series. Mahela Jayawardene was awarded Man of the Match for his brilliant triple-century. 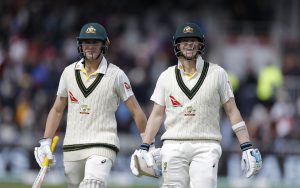 Australia won the toss and elected to bat against West Indies. Australia lost David Warner early while Usman Khawaja scored a decent fifty. After his dismissal,  Steve Smith joined hands with his favourite batting partner, Marnus Labuschagne.  They put on a  mammoth first innings total  of 598/4 in Perth on day two of the first Test against West Indies.

Labuschagne completed his second Test double century while Smith made his fourth as Perth witnessed the rare occurrence of two double hundreds in a single team innings.

This was only the 17th instance of two double hundreds coming in a team innings in Test cricket history and also the first such instance since January 2012 when Ricky Ponting and Michael Clarke made double hundreds against India in Adelaide.