The newly formed COVID-variant Omicron has been reported in India as well, just a few days after being found in South Africa, even as governments around the world are rushing to stop the spread. According to the World Health Organization, as many as 24 countries, including the US, Spain, Canada, Britain, Austria, Portugal, and the UAE, have so far reported the new COVID-19 variant Omicron B. 1.1.529. Two cases of the new COVID-19 variant, were detected in Karnataka, making them the first infections from the new strain in India.

The detection of new COVID-19 variant Omicron in South Africa has fired up the fears around the world and cast a shadow on the India series. Here we look at how Omicron till now have impacted Cricket all around the globe.

The women’s ODI World Cup qualifiers hosted in Zimbabwe were called off after travel restrictions were imposed on large parts of southern Africa, following the detection of Omicron, in Zimbabwe. The qualifier in Zimbabwe, were the first of many cancelled cricket events around the globe.

“We are incredibly disappointed to have to cancel the remainder of this event but with travel restrictions from a number of African countries being imposed at such short notice, there was a serious risk that teams would be unable to return home,”  said Chris Tetley, the ICC head of events.
Concerns over the future of the qualifier were raised on November 27th morning, when the match between Sri Lanka and West Indies was called off without a ball bowled. The fixture could not be played because a member of the Sri Lankan support staff had tested positive for Covid-19.

On November 27, Cricket South Africa (CSA) and Koninklijke Nederlandse Cricket Bond (KNCB) mutually agreed to defer the three-match One-Day International (ODI) series which began on Friday. The first match of the series, which forms the part of the World Cup super league between the two sides was washed out. Both the teams, Netherlands and South Africa are out of the automatic qualification zone in the World Cup Super League, so COVID-19 brings in a bigger problem for cricket-playing nations. 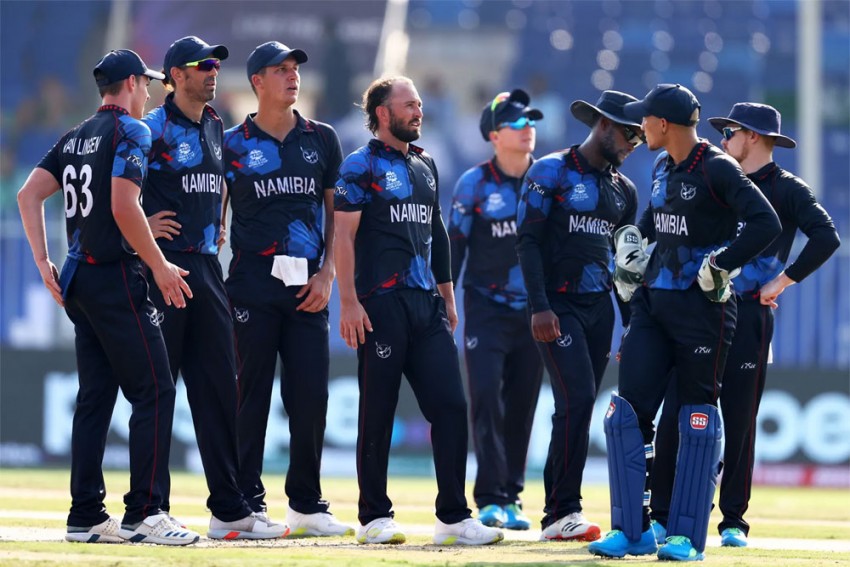 A three-nation cricket series in Namibia was also cancelled due to the new variant of the coronavirus, Omicron, making it the third international cricketing affair being called off. The ICC Cricket World Cup League 2 tournament in Namibia was called off on November 30th, after Oman and UAE left citing travel bans in southern Africa due to Omicron, that threatens to start a new wave of the COVID pandemic.

Cricket South Africa postponed a round of domestic games after some of the team members tested COVID-19 positive on arrival. “Cricket South Africa can confirm that all three, Round 4, Division Two CSA 4-Day Domestic Series matches scheduled to take place between 02-05 December have been postponed,” the board said in a statement.

“The competition is not being held in a Bio-Secure Environment (BSE) and in the last couple of days, some positive COVID-19 test results have emerged following team pre-arrival testing sessions. Activating the precautionary and preventative measures stipulated in the organisation’s COVID-19 protocols to ensure the health, safety and well-being of all involved is a top priority for CSA.” added CSA.

The best option that is being discussed is to curtail the tour to two Tests and four T20Is to enable players to recover. Curtailing the tour makes the player available for India’s next home assignment, the limited-overs series versus West Indies. The limited over series starts from February 6, consisting of three ODIs and three T20Is . In such a scenario, India has offered to play an ODI series towards the end of next year, ahead of the 2023 World Cup.

The Indian test skipper, Virat Kohli attended the pre-match press conference for the second and final Test of the series against New Zealand on Wednesday. “We are not playing in normal times anyway. So there is a lot of planning that is involved, a lot of preparation that is involved in terms of understanding exactly what is going to go on. There are players who are not part of the group right now who will be entering quarantine to join the team bubble to fly in a charter”, said Virat Kohli in the presser.

“Those kinds of things you want to seek clarity as soon as possible. So we have spoken to all the senior members of the squad. Obviously, Rahul bhai [Dravid, the coach] has initiated a conversation within the group, which is very important.”, added Virat Kohli.

A BCCI insider confirmed that latest by Saturday, a formal announcement over rejigged tour itinerary will be announced. The BCCI is yet to announce squad for the series.

IPL 2022 which was set to return to India this year with full crowd capacity, but if Omicron outbreaks as the second wave of COVID-19, will again be having no crowds. The outbreak of deadly virus can even lead to postponing the tournament, or shifting it back to the UAE soil.

IPL 2021 began in India, but was stopped only after about half the matches due to the increasing havoc of Corona in India. The remaining matches were organized in Dubai, in the months of September-October. In such a situation, fresh questions have arise about the venue of IPL 2022. BCCI secretary Jay Shah reiterated in front of the media that IPL 2022 is to be held in India, a few days ago.

Playing in Bio bubbles without adequate breaks leads to exhaustion for the Indian players and now with the new COVID-19 variant Omicron, their mental health will also be affected in a long run.

Click here to know more about Bio Bubble, and it’s affect on players

Now the question is How many more cricket series, fixtures, and tournaments will be affected due to the new variant of virus. Is there any permanent solution to the chaos of playing cricket in these times, or postponing the series, or taking the necessary precautions like no crowds, less domestic/international travel is the only way forward for a cricket match to take place now.

ICC and the Cricket Boards will be having a big task to make sure the upcoming series and ICC tournaments like 2022 T20 WC takes place as scheduled with least or minimal risk of the new COVID-19variant Omicron.