Cricket is back!!!!! After a gap of 80+ days international cricket is finally back, much to the relief of millions of cricket fans across the globe we will be witnessing the first Test match between England and West Indies. This three Test match series will be played behind closed doors. While every summer in England is exciting this time it gets even better owing to the long COVID-19 break. The last time West Indies visited England for a Test series back in 2017 it turned out to be a close contest and England had to give it their best to stop West Indies and their ‘”Hope” of winning the Test series. Here’s hoping we get to watch another close contest like the previous Test series. What makes this series even more exciting is that It’ll feature 2 of the best Test all-rounders of the current era. Both the teams will be itching to go out there and give it their best shot. So here’s everything you need to know about the first Test match between England and West Indies.

Where to watch England vs West Indies 1st Test : Fans in India can watch the entire Test match on Sony Network and the English fans can watch it live on Sky Sports.

What To Expect: Both the teams would like to play it safe and hence despite the pitch conditions not being too batting or bowling friendly will take no chances and go with the extra batting option. The weather forecast in Southampton shows it’s partly cloudy and hence should assist the pacers. The scores in this Test will most probably still be high scoring though. Ben Stokes is all set to lead England for the first time as Root won’t be playing the 1st Test match on account of the birth of his second child. England would persist with Denly and his defensive approach and thus most likely play the extra batsman instead of Chris Woakes. Archer would most probably get the nod ahead of Mark Wood. It’ll be exciting to see how Stokes would lead his side for the first time. 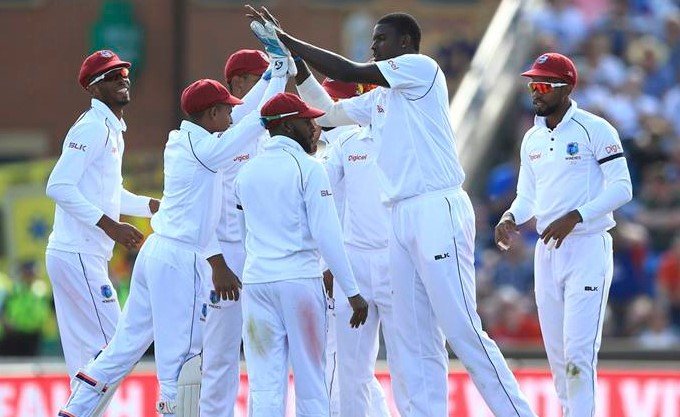 The absence of Hetmyer and DM Bravo might hurt their batting lineup but the addition of Shannon Gabriel will definitely strengthen their already strong pace attack. A lot will depend on Brathwaite and Hope and if West Indies have to perform with the bat. They could either go for a spinner or play the extra pacer.

Head To Head: The Test Matches played between the 2 teams are 157 out o which England have won 49 times and dew 57.